Tactical Flashlight: What and When

No matter where you are, on or off duty, one of your most reliable tools is your handy everyday flashlight. If you’re a practical person like most, you keep it with you all the time. A good rule of thumb is if you carry a gun, carry a flashlight. The same rule applies to weapons with traumatic cartridges

In the old days, the only “tactical” flashlights were big, bulky, heavy monsters that ran on D batteries and weighed down your belt when worn. It was said that you had to carry a gun on one side and a lantern on the other to keep your balance. Just as the switch to polymer bodies reduced the weight of most pistols, the switch to aluminum construction for the letter and light diodes helped to lighten their weight, but many models were still quite bulky. The main reason for their large size was insufficient lighting power and too short battery life of the lights.

This is not the case today. With the invention of energy-efficient light source elements and the advancement of longer-lasting battery technology, manufacturers began reducing lanterns to more palatable sizes and weights, maintaining, and in some cases surpassing, the brightness of their larger predecessors.

One of the main factors that determine a good tactical flashlight is the light intensity measured in lumens.

The dictionary definition of a lumen is “a unit of luminous flux equal to the light emitted in a unit solid angle by a uniform point source of light intensity.” In simple terms, a lumen is the amount of light generated by a light element. Non-law enforcement consumer EDC lights typically have up to 200 lumens. True tactical flashlights run up to 1000 lumens or more.

The more lumens the lantern emits, the more light you will see. This works in your favor in two ways. First, if you’re looking for a suspect, it’s harder for them to hide from high-intensity light. Second, once you shine more lumens on a suspect, it becomes harder for them to see you clearly, often forcing the suspect to cover their eyes with their hands, giving you a better view of whether they have a weapon, which is an obvious tactical advantage.

Many modern flashlights have a dual light level option (maximum and economy), so you can either fill the darkness with light when you need full power or use economy mode to save batteries.

Battery life of the flashlight

Battery life is a function of two variables: flashlight intensity (lumens) and battery life. Obviously, every time you turn on the flashlight, the batteries drain. But how much is left? And how long until the batteries run out?

LED lamps, which have become the new standard, are much more efficient than traditional halogen lamps.

This reduces battery drain compared to comparable traditional lamps. However, the higher the intensity, the shorter the battery life, simply because the battery produces more energy per hour than it would with lower consumption. High-intensity lights require more power than their lower-intensity counterparts. Knowing this, manufacturers often combine lower-intensity lamps with lower-rated batteries in their models, mainly to reduce costs and offer a lower retail value.

Nickel-Cadmium (NiCad) batteries have historically been the most common flashlight power source, providing adequate power and a decent average life for the price. They can power a lot of mediocre flashlight battery usage for hours before they start to fade. Modern lithium batteries give a lot of light of higher intensity. They are a little more expensive, but have quite sufficient power and duration of power required for operation at night and in other conditions of insufficient lighting with a large amount of light flux. 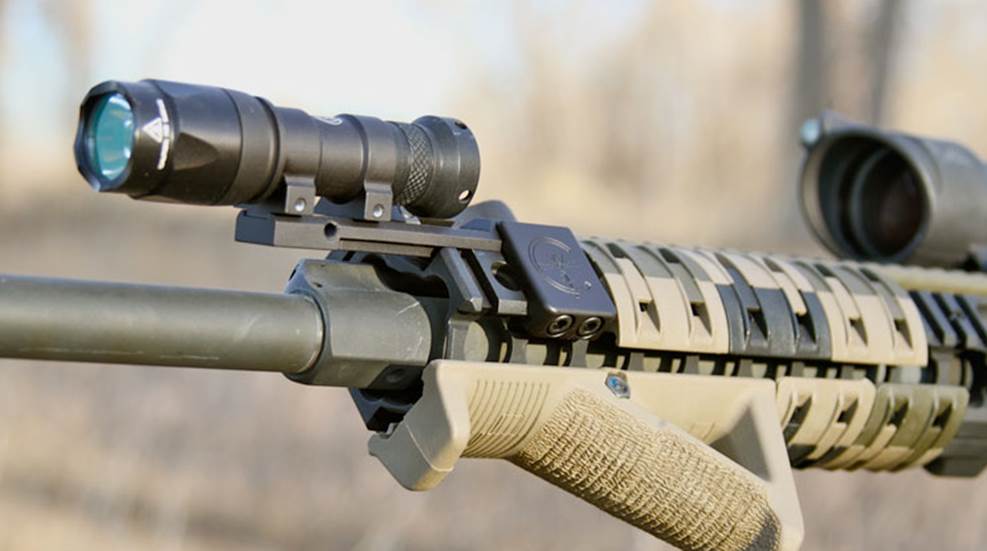 One of the advantages of old-style lanterns was their durability. They were really massive. You could drive a nail with them. Throw them on the pavement during a chase and they’ll still shine beautifully. Today’s smaller, lighter lanterns are made from stronger metal and composite materials, giving them the same durability and drop protection in a more convenient design. The ANSI FL1 standard measures durability by dropping a lantern six times onto concrete from a nominal height.

Many tactical lights are equipped with additional features, such as a cover that doubles as a glass breaker. This can be useful if, for example, you need to break the window of a burning car. The raised bezel on the reflector side also provides additional lens protection as the lens no longer sits flush with the edge. In addition to preventing damage in the event of a fall, many of today’s best lights are waterproof or water-resistant thanks to seals and O-rings at each end of the housing.

Flashlight on weapon vs. flashlight in hand

To mount or not to mount, that is the question. Do you attach a Picatinny rail light to your weapon or do you hold it in your hand when you aim? Both methods have their advantages.

Whichever method you choose, be sure to practice with a flashlight so that you have the skills when the time is right. Many operators and police officers carry both flashlights so that they have a choice, as well as a backup flashlight if needed.