US military personnel who have recently purchased or received an Army uniform will surely know that it must conform to the “AR 670-1” standard. But what exactly does this term mean?

Officially titled “Wear and Appearance of Army Uniforms and Insignia,” AR 670-1 is a guide to how to look in uniform and pretty much everything from the length of men’s and women’s hair to concealing visible tattoos and how hold an umbrella It serves as a general pattern of uniform wear with reference to more detailed rules for individual items and their individual rules as well.

Updated in June 2017, the latest Army Regulation 670-1 replaced seven previous regulations dating back to July 2008. Within each single category, there are “brochures,” as the Army calls them, that describe each part of the uniform in much more detail.

One such pamphlet, DA PAM 670-1, lays out rules for sleeve lengths, colors, accessory options to go with tops and bottoms, and other details for various styles of uniform, from dress to battle uniform, including how and where to display medals and ribbons and other details.

Among the regulations are requirements regarding which boots are acceptable to wear with the Army Combat Uniform (ACU). The Army issues the boots, but soldiers are also allowed to buy and wear their own as long as they meet uniform standards. 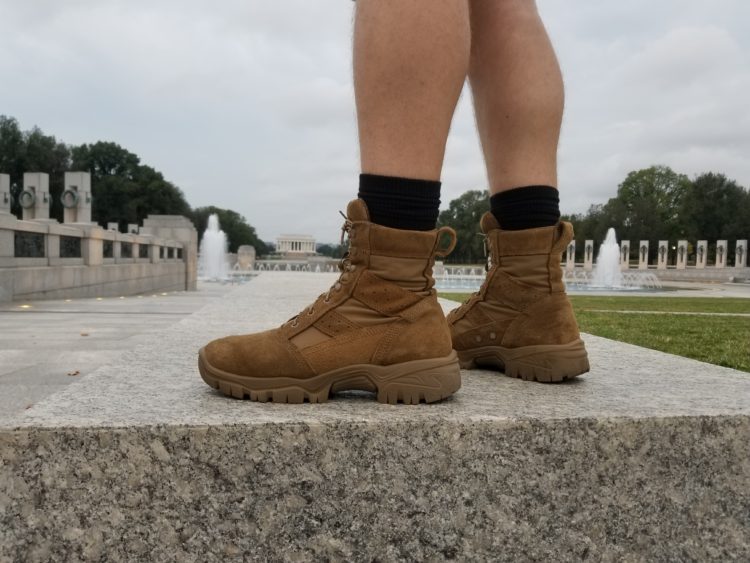 “Alternatively, Soldiers may wear commercial boots similar to the Army Combat Boot (TAN) design as authorized by command. Boots must be between 8 and 10 inches high and be made of TAN turned-out genuine leather, with a plain toe and a sole that matches the main color. Rubber and polyester polyurethane are the only materials allowed for the sole. Reinforcing materials shall not exceed 2 inches in height as measured from the bottom of the sole and shall not extend over the back of the heel, boot or top of the toe. The outer part of the upper part of the boot will not contain mesh, and it will be made either entirely of all leather or a combination of leather and non-mesh fabric. Soldiers may wear optional boots in lieu of Army Combat Boots (TANs) as authorized by the commander; however, they do not replace statutory boots as a mandatory item of wear”